Lucky to Have Local Sweepstakes

Spend Local and you could WIN!

Between February 15, 2022, and March 31, 2022, spend local and save your receipts from your Cary-Grove community purchases.

By March 31, drop off or email a copy of your receipts to the Cary-Grove Area Chamber of Commerce for your chance to WIN!

The week of April 4, we will draw and announce the winners.

For an extra chance to Win!!
ALL PARTICIPANTS THAT USE
#KeepItCaryGrove
WILL BE ENTERED INTO A DRAWING
for a chance to win a
gift card to a local restaurant. 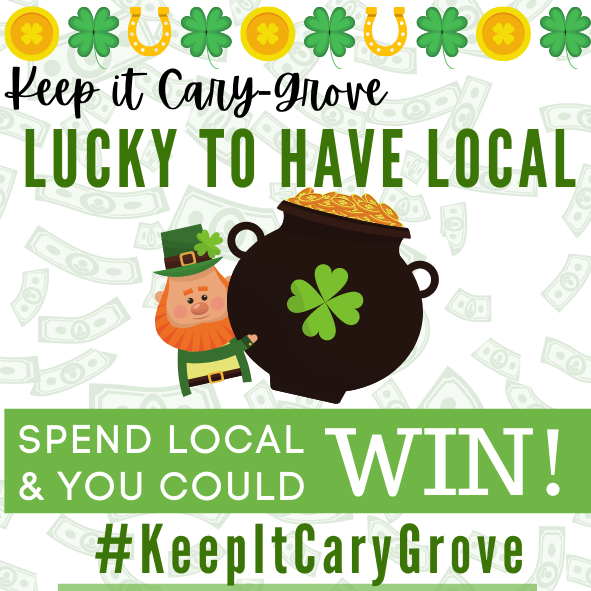 for all your local resources in one place!

Q:    Can I participate if I am not a Cary or Fox River Grove resident?
A:    Yes. We welcome anyone who patronizes our Member businesses to participate

Q:    What kind of information will you need for the redemption?
A:    We will ask for your name, telephone number, and email address.

Q:    Can I win more than one prize?
A:    No.  There is a one prize per person and per household awarded.
​
Q:    Why are you doing this?
A:    Now more than ever our small businesses need our help!  The effort of all of us shopping locally makes a big difference.  The Cary-Grove Community is home to a wide variety of small businesses that provide valuable goods and services and who put an immense amount of time, energy, and dollars back into our local economy. Our Cary-Grove community businesses pay property tax, pay for our schools and donate to and provide support for local non-profits, events, and teams. They are the backbone of our Community, and we know they truly appreciate the love and support from our community.

​Q:    How does the redemption work?  How do I earn drawing tickets?
A:    Drawing tickets are issued based on the amount spent with a maximum of 20 tickets ($500 and over) see chart below: 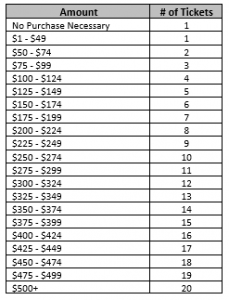 LUCKY TO HAVE LOCAL SUPPORT LOCAL PROMOTION
OFFICIAL RULES
NO PURCHASE NECESSARY TO ENTER OR WIN. VOID WHERE PROHIBITED OR RESTRICTED BY LAW.

SPONSOR
The Sponsor of the Promotion is The Cary-Grove Area Chamber of Commerce ("Sponsor"), 445 Park Ave., Cary, IL  60013. By participating in the Promotion, each Entrant unconditionally accepts and agrees to comply with and abide by these Official Rules and the decisions of Sponsor, which shall be final and binding in all respects. Sponsor is responsible for the collection, submission or processing of Entries and the overall administration of the Promotion. Entrants should look solely to Sponsor with any questions, comments or problems related to the Promotion. Sponsor may be reached by email at info@carygrovechamber.com during the Promotion Period.

LOCAL BUSINESS SPONSORS
This Promotion is being conducted with the intent of positively impacting the local business community (collectively, the “members of the Cary-Grove Area Chamber of Commerce”).

ELIGIBILITY
The Promotion is open only to persons who are legal residents and physically reside within the United States of America who are eighteen (18) years of age or older at the time of entry (the “Entrant” or “Entrants”). Employees of the Cary-Grove Area Chamber of Commerce or it’s Board of Directors (collectively, the “Sponsor”), (including, in each case, immediate family members) are not eligible to enter the Promotion. For purposes of this Promotion, “immediate family members” is defined as spouses, siblings, parents, children, grandparents and grandchildren, whether as “in-laws”, or by current or past marriage, remarriage, adoption, co-habitation or other familial extension, and any other persons residing at the same household location, whether or not related.
In order to enter the Promotion or win the prize, the Entrant must comply fully with these Official Rules (the “Rules”), and by entering agrees to be bound by these Rules and the decisions of the Cary-Grove Area Chamber of Commerce, whose decisions shall be binding and final in all respects. This Promotion is subject to all applicable federal, state and local laws and regulations and is void where prohibited or restricted by law.

Only one prize per person and per household will be awarded. Gift cards and gift certificates are subject to the terms and conditions of the issuer. Prizes cannot be transferred, redeemed for cash or substituted by winner. Sponsor reserves the right in its sole and absolute discretion to award a substitute prize of equal or greater value if a prize described in these Official Rules is unavailable or cannot be awarded, in whole or in part, for any reason. The ARV of the prize represents Sponsor's good faith determination. That determination is final and binding and cannot be appealed. If the actual value of the prize turns out to be less than the stated ARV, the difference will not be awarded in cash. Sponsor makes no representation or warranty concerning the appearance, safety or performance of any prize awarded. Restrictions, conditions, and limitations may apply. Sponsor will not replace any lost or stolen prize items.

WINNER SELECTION/ODDS OF WINNING
The Winner(s) of the  Promotion will be selected in a random drawing from among all eligible Entries received throughout the Promotion Period. The random drawing will be conducted on April 1 after the Promotion Period by Sponsor or its designated representatives, whose decisions are final. Odds of winning will vary depending on the number of eligible Entries received.

WINNER NOTIFICATION
Winners will be will be notified within (3) business days after the Drawing in accordance with the contact information supplied by the Entrant at the time of entry. Prize Notification is deemed to have occurred immediately upon the placing of a phone call or sending of an e-mail or any other form of communication the Cary-Grove Area Chamber of Commerce may use to contact a potential Winner. The Cary-Grove Area Chamber of Commerce is not obligated to leave a voicemail or any other type of message. If a potential Winner does not respond to the Prize Notification within five (5) business days after the Prize Notification, communication Cary-Grove Area Chamber of Commerce may select an alternate winner in a random drawing from all remaining eligible Entries. The Cary-Grove Area Chamber of Commerce reserves the right to modify the notification procedures in connection with the selection of any alternate potential Winner, if any. Sponsor is not responsible for any delay or failure to receive notification for any reason, including inactive email account(s), technical difficulties associated therewith, or Winner’s failure to adequately monitor any email account.
Any winner notification not responded to or returned as undeliverable may result in prize forfeiture. The potential prize winner may be required to sign and return an affidavit of eligibility and release of liability, and a Publicity Release (collectively "the Prize Claim Documents"). No substitution or transfer of a prize is permitted except by Sponsor.

PRIVACY
By entering the Promotion, Entrant grants Sponsor permission to share Entrant’s Name and contact information with the other Promotion Entities for the purpose of administration and prize fulfillment, including use in a publicly available Winners list.

LIMITATION OF LIABILITY
Sponsor assumes no responsibility or liability for (a) any incorrect or inaccurate entry information, or for any faulty or failed electronic data transmissions; (b) any unauthorized access to, or theft, destruction or alteration of entries at any point in the operation of this Promotion; (c) any technical malfunction, failure, error, omission, interruption, deletion, defect, delay in operation or communications line failure, regardless of cause, with regard to any equipment, systems, networks, lines, satellites, servers, camera, computers or providers utilized in any aspect of the operation of the  Promotion; (d) inaccessibility or unavailability of any network or wireless service, the Internet or website or any combination thereof; (e) suspended or discontinued Internet, wireless or landline phone service; or (f) any injury or damage to Entrant's or to any other person’s computer or mobile device which may be related to or resulting from any attempt to participate in the Promotion or download of any materials in the  Promotion.

If, for any reason, the Promotion is not capable of running as planned for reasons which may include without limitation, infection by computer virus, tampering, unauthorized intervention, fraud, technical failures, or any other causes which may corrupt or affect the administration, security, fairness, integrity or proper conduct of this Promotion, the Sponsor reserves the right at its sole discretion to cancel, terminate, modify or suspend the Promotion in whole or in part. In such event, Sponsor shall immediately suspend all drawings and prize awards, and Sponsor reserves the right to award any remaining prizes (up to the total ARV as set forth in these Official Rules) in a manner deemed fair and equitable by Sponsor. Sponsor and Released Parties shall not have any further liability to any Entrant in connection with the Promotion.

WINNER LIST/OFFICIAL RULES
To obtain a copy of the Winner List or a copy of these Official Rules, send your request along with a stamped, self-addressed envelope to Cary-Grove Area Chamber of Commerce, 445 Park Ave., Cary, IL  60013. Requests for the names of the winners must be received no later than December 31, 2020.

AMOE: ALTERNATE METHOD OF ENTRY
Any local resident who is eighteen (18) years of age or older at the time of entry (the “Entrant” or “Entrants”) will be allowed one Alternate Method Of Entry during the Promotion Period by appearing at the Cary-Grove Area Chamber of Commerce, 445 Park Ave., Cary, IL  60013.  The Chamber office hours are limited so Entrant must call the office at 847-639-2800 prior to appearing. There is no purchase required for Alternate Method of Entry.